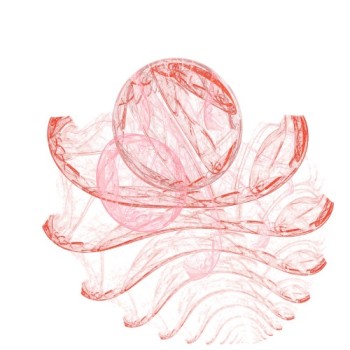 Excited to Announce the performers and speakers for Frequency Freaks Workshop #2.  From new equipment to electronica to wild experimental this is promising to be an exciting workshop!

Andrew will join us for our workshop on April 23rd.  Andrew is the founder of Kilpatrick audio, purveyors of the some of the finest engineered and most innovative synthesizer modules in the world.

Fresh from SuperBooth in Germany, he will talk about and demonstrate his latest creation:  CARBON – Sequencer and Performance System.  Building upon the success of the K4815 Pattern Generator, CARBON takes pattern-based sequencing to a whole new level. Supporting polyphony, multiple tracks, editing and scene-based operation, CV/Gate, MIDI and USB.

From recording cave echoes in the mountains of southwest Virginia to hosting underground parties in Brooklyn, Benjamin Green has explored sound, structure, and narrative in computer and electro-acoustic music. His interest in synthesis and composition was nurtured under the instruction of Elliott Schwartz, Bob Moog, and Pauline Oliveros during the mid-1990s. After moving to New York in 1998, Benjamin collaborated with artists such as Multipolyomni, Ben Neill, We ™, and DJ Olive on installations and performances at such venues as The Kitchen and Senspace. It was Ben Neill who introduced him to modular synthesis on a Synton 3000 system in 1999. After that, modular synths such as Serge panels, the Fenix, and Modcan A Series became staples in Benjamin’s toolkit. Benjamin moved to Toronto in late 2008 where he continues to work with local artists (such as Marker Starling), create mixed media works, and record songs with his daughter. In the last few years, he has switched to the Eurorack format, or the Dark Side as he prefers to call it. 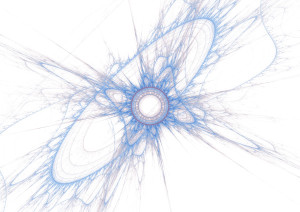 We are both honoured and extremely excited to announce the following performers for Frequency Freaks Workshop #1.  Encompassing a wide range of styles from EDM to Ambient & Experimental this is promising to be an exciting workshop!  Following a tradition which began at TOMS there will be a Q&A after each performance:

Steve Castellano will be playing a new set on his Eurorack/Moog Sub 37 rig in his first public performance since last year’s Toronto Sound Fest. If you haven’t already, you can check his work out on Bandcamp and Soundcloud.

Always interesting, Derek will be playing is Modcan system for us.
You can check him out on Bandcamp

Paul Stillwell (member of the Candian Electronic Ensemble) & Dave Sutherland will be performing an improvised set with Paul on his Eurorack system and Dave on his Synthi AKS and Phenol. This will be their first time performing together after only one rehearsal in August of 2015!
You can check Loose Ion out at BandCamp, Intrepita at SoundCloud and The CEE at BandCamp

Matt has provided this little teaser for his talk next Saturday.  “In this track I have not used any filters .. Just the NW1 and a step sequencer multi tracked, with some delays and verbs from the sputnik 4 tap, and intelijel springray.”

We are really excited about our new home at the Arraymusic Studio at 155 Walnut Ave in Toronto!

Moog Audio is presenting a talk by Matt Thibideau and we still have slots open for performance or other talks.  The current plan is for Matt to speak about the new Waldorf nw1 – the original ppg wave bank, making user wave tables, etc.

Please reach out to us if you would like to bring your modular synth and/or perform so we can make sure there is enough space and time. 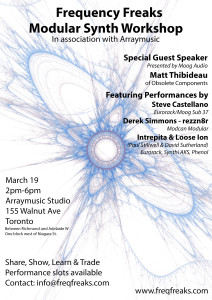 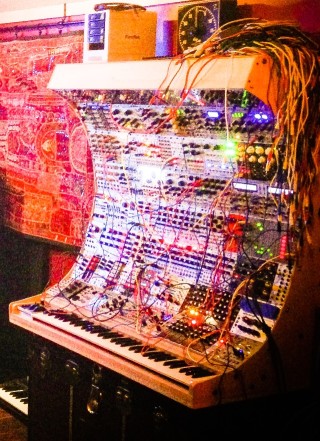